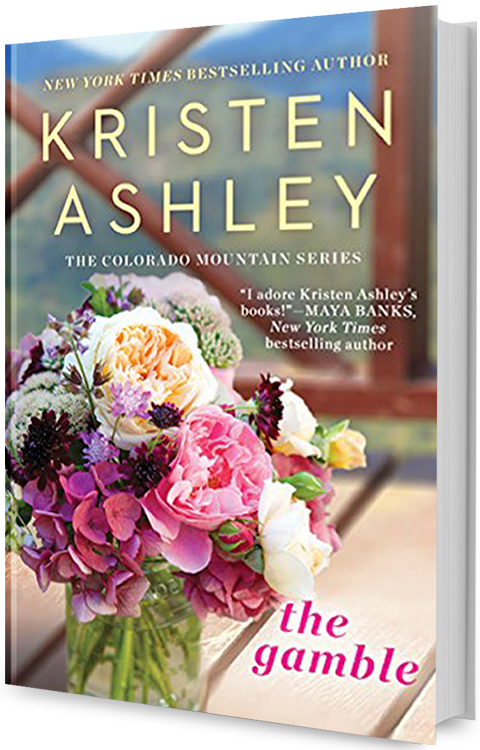 This edition is a re-release of The Gamble with a different cover in trade paperback, measuring 8×5¼, unlike the mass market “pocket books” paperback.

Nina Sheridan’s on a timeout adventure in the Colorado mountains. She needs distance from her clueless fiancé, distance to decide whether she wants to spend the rest of her life with a man who doesn’t care enough to learn how she takes her coffee.

Arriving in a blinding snowstorm at the A-Frame she rented for two weeks, she comes face to face with the most amazing man she’s ever seen.

Minutes later, when he kicks her out of his house, she goes head to head with him.

Beyond angry because she’s flown half a world away to start her timeout adventure, not to mention her sinuses hurt, she heads back down the mountain and ends up in a ditch. Unable to extricate herself, she gives up, hopes for rescue and falls asleep in the backseat.

The next morning she wakes up in the amazing man’s bed and she’s sick as a dog.

Holden Maxwell spends days nursing Nina back to health and then he spends the next two weeks trying to convince her to take her Colorado adventure further. In other words, make it permanent and take a gamble on him.

Nina has a tough time fighting her attraction to Max, especially when it seems all Max’s friends, her mother, stepdad and the whole town of Gnaw Bone want them together. Not to mention, both she and Max get embroiled in the murder of Max’s ex-friend and the town of Gnaw Bone’s most detested resident—a man everyone has motive to kill.