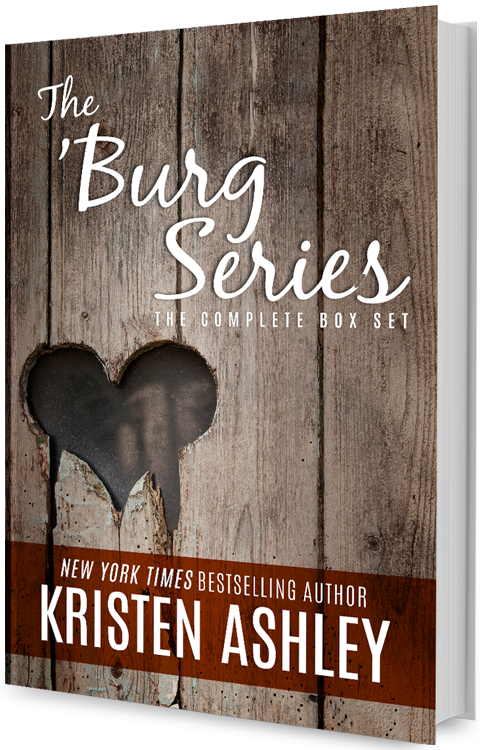 Yep, all the books rolled into one at a discount price!

If you’re ready to take the plunge right into the heart of The ‘Burg, hit this set and get For You, At Peace, Golden Trail, Games of the Heart, The Promise and Hold On!

Lieutenant Alexander Colton and February Owens were high school sweethearts. Everyone in their small town knew from the moment they met they were meant for each other. But something happened and Feb broke Colt’s heart then she turned wild and tragedy struck. Colt meted out revenge against the man who brought Feb low, but even though Colt risked it all for her, Feb turned her back on him and left town.

Fifteen years later, Feb comes back to help run the family bar. But there’s so much water under the bridge separating her and Colt everyone knows they’ll never get back together.

Until someone starts hacking up people in Feb’s life. Colt is still Colt and Feb is still Feb so the town watches as Colt goes all out to find the murderer while trying to keep Feb safe.

As the bodies pile up, The Feds move in and a twisting, turning story unravels exposing a very sick man who has claimed numerous victims along the way, Feb and Colt battle their enduring attraction and the beautiful but lost history that weaves them together.