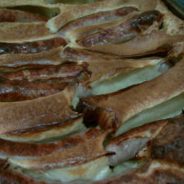 The British have a way with putting meat and bread together and they have a long, glorious history of this.

Have you ever heard of the Earl of Sandwich?

I rest my case.

If you ever come to the British Isles and go out to eat, do not eat pizza or hamburgers. You will be disappointed. You will go home and tell your friends and family that British food sucks.

And you will be wrong.

Order a steak and ale pie (meat, bread (or, more accurately, puff pastry which is even better) AND gravy) or a Cornish pasty (that is pronounced pah-stee not pay-stee).

And never, but never, turn down Toad in the Hole.

Allow me to digress. British sausages ROCK! Even the crappy ones are AWESOME. But if you get fresh ones that are made mostly of meat, say, from a Farm Shop, you will cook them and eat them and think you have gone to Sausage Heaven. They make them in all kinds of flavours. Pork and apple sausages. Sweet chilli sausages. English herb sausages. They are thick and meaty and super delicious.

Laughing behind their hands that the rest of the world thinks their food sucks while they shovel food in their gobs that ROCKS, the Brits regularly serve and eat food at bizarre times that will make others (for instance, Americans) think, “Uh… wha?” Baked beans and sautéed mushrooms with breakfast. Sandwiches made of two pieces of bread and thick chips (or steak fries, the best way to describe them to an American although they are NOT THAT). Yes, a steak fry sandwich. Knock it? You haven’t tried it.

And they eat sausages morning, noon and night.

If you’re in Cheshire, it is a moral imperative that you go to Cheerbrook Farms and buy sausages from them. And anything else. I used to shop at Cheerbrook Farms (which, luckily, was a stone’s throw away from my in-law’s house) like I shop at Nordstrom’s. The place is, essentially, a medium-sized barn but I could spend all day in there.

And their sausages can’t be beat.

WARNING: This is extreme cooking people. You can not be a tentative cook when cooking Toad in the Hole. That said, it’s worth the possible grease fire in your house, or third degree burns, trust me. (Just kidding, a little.)

Toad in the Hole

My dirty secret: My ex, Mark and I used to double the Yorkshire Pudding recipe and we'd eat this with nothing else. Try it. Pure yum!

*Another reason I feel the British are geniuses is that the Brits call everything “pudding”. Yorkshire Pudding is bread. Dessert, the course of the meal, is called, generically, “pudding” (as in, “Mummy, what’s for pudding?”). Steak and Kidney Pudding is another meat/gravy/bread masterpiece with wet, sticky suet bread around the meat and it's steamed. If in doubt of what to eat on the British Isles, anything with the word “pudding” in it is an excellent choice. Though, you may be having dessert for your main course. Or a meat dish for dessert. Go with it! You won’t be disappointed.