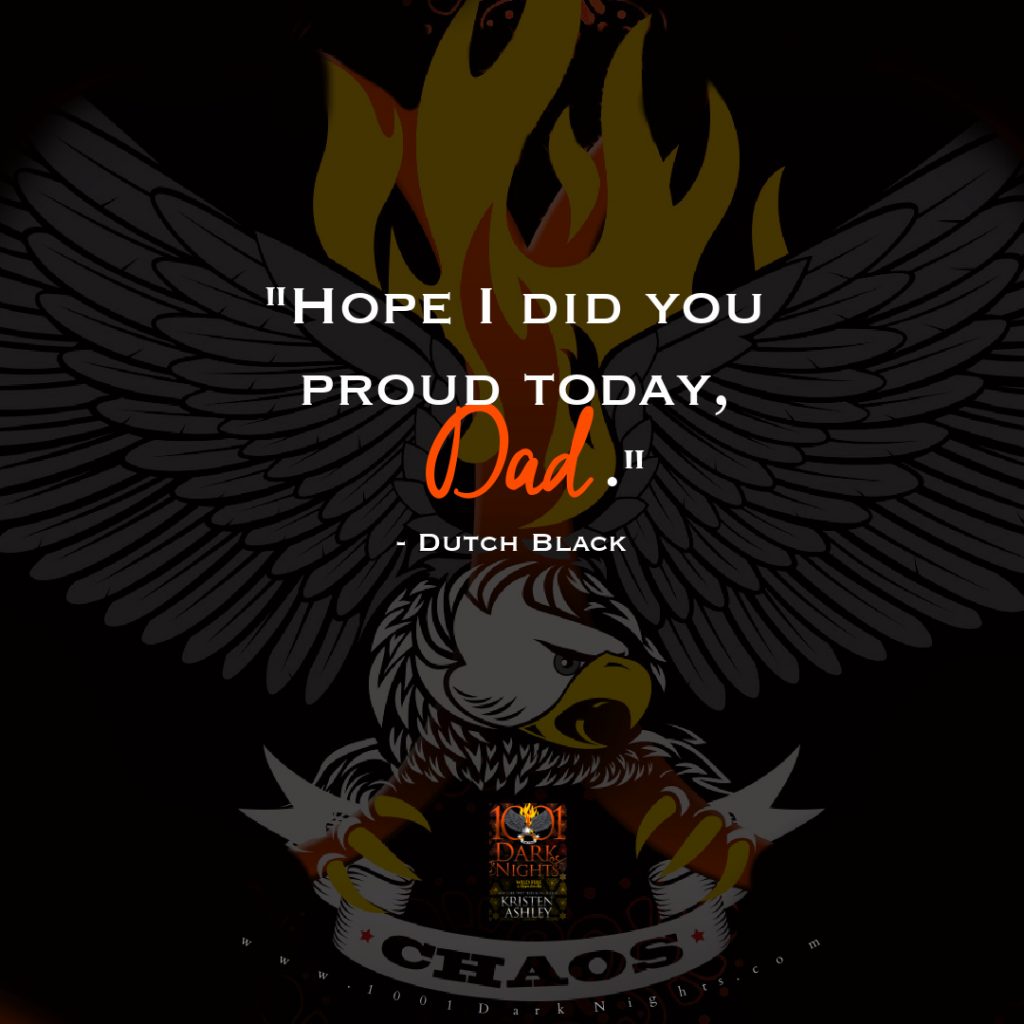 “And Murtagh is just a cat. God works in mysterious and sometimes hideous ways that are still wondrous. He took away Graham Black. But when He did, He left the world with two of him. Jagger and you.”

But when Dutch said that in Hound and Keely’s book, I knew I wasn’t done with Chaos.

In fact, I knew I’d probably never be done with Chaos.

And first, I had to go back to the Black Brothers.

See, from the minute Black is mentioned as the brother who was lost during their war, it was like being hit by lightning.

Not like…Whoa! Who is this guy?

But like…This guy is the most important brother in Chaos.

You might think Tack’s the most important, and maybe he is.

Tack had the vision. He built the strategy. He persevered and led and kept the brothers together, even when they were not all of like minds. He lost his wife to his mission (she wasn’t much of a loss, but straight up, he sacrificed his marriage for the Club). His children suffered because of it.

And they all lost Black.

You also might think Hound’s the most important brother. That quiet man that isn’t quite in the background. He’s always there and he’s the one the leader calls on to do the work no other brother is asked to do—and shoulder the terrible burdens that come with it.

I don’t know how it is for a reader. If Black seemed nebulous or if you all felt the power of him like I did.

In Wild Like the Wind, when Keely is raging in her grief and sharing with the brothers what she lost in Black, my heart shredded.

How could this woman ever heal?

But for me, more importantly (considering I was writing the book on how she’d heal, or at least come to terms and move on), the question was, how would those boys ever know what a beautiful man their father was?

And that was it.

A loose end I couldn’t let dangle, my heart couldn’t hack it.

All my characters are mine, obviously, but in that moment, it was like Dutch and Jagger sprung from my loins, not my brain.

And later in that book, when they took Hound’s back, I knew they’d have to find their HEAs…

I knew I had to give them their HEAs.

I honestly could not wait to dive into Dutch’s book. I felt his struggle and Georgie had come to me so strong, she was so perfect, I had to dive in. His story flew from my fingers as freely as the tears flowed from my eyes as I traveled with him through the murky bi ways as he searched for his path.

Then there was the moment in that book where Dutch allows the pain of loss to come to the surface, and among other things, he utters this line:

“I remember how long his legs seemed, like they went on for miles, when he lay in bed beside me, reading me a book before I went to sleep.”

This one sentence said everything about what kind of father Dutch remembered Black being. How he looked up to him. How he knew he was loved. How he understood how much he was loved.

And the enormity of what, as a five-year-old boy, he lost.

I was so very lucky Georgie came to me as she did. That I had her hands and her heart to give to Dutch to hold him safe.

Of particular note with Georgie, I gotta mention it, when they’re having lunch with Eddie and Hank, and Dutch learns something terrible that shakes him, and everything fades for her. Everything. But Dutch.

In that moment, I was good to go with Georgie.

I could pass guardianship to her.

But that emotional journey made me hesitant to dive into Jagger.

And when I did, he refused to come to me. So stubborn, that guy. Showing himself only in fits and starts, mostly he held himself distant and sent me around the bend.

I got his woman, Archie. I knew her through and through.

But Dutch, who remembers his father, so he knows what he lost was one thing.

Jagger, who never really had him?

Well, we’ll just say when Jag finally opened up to me, the results were not pretty (like, a scene I wrote, one scene, took six hours, and I cried that entire time, I…am not…lying).

And again, thank God for Archie.

But that’s for another blog.

Needless to say, I love these boys. I love them like they’re my own, really my own.

Something else I love. They’ve offered me a gateway to more time with my biker brothers. You’ve met (or will meet) Hugger in Dutch’s book, more mentions are to come.

And more stories too, in the Wild West MC Series that’ll mash up three motorcycle clubs in two states.

Now that is for another time.

And I hope your heart settles as they find their HEAs.

Just as mine has done.