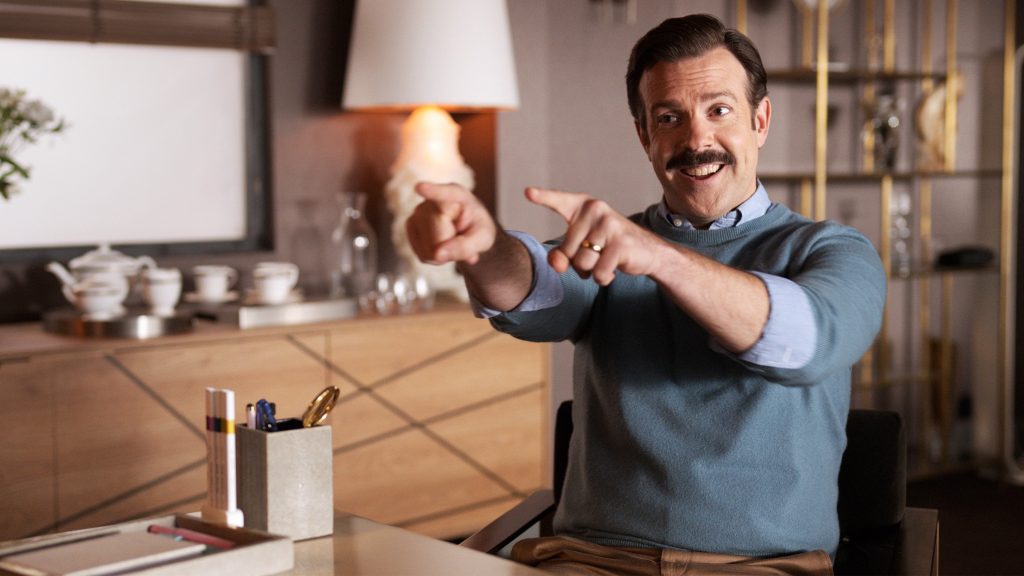 I have a girlfriend who has been so desperate for me to watch Ted Lasso on Apple TV that she sent me an Apple gift certificate so I could subscribe for six months. Seriously, six months. She needed me to see this so badly, she gave me a running start.

I’d heard the buzz about Ted. Everyone was talking about Ted. And I got worried about watching Ted, because when everyone talks about something, I’m sure to have my expectations inch higher and higher. And when I watch, I’m disappointed.

Spoilers to come and a lot of them, so beware, because I’m unleashing, and it’s no holds barred.

And I am the Queen of the Overstatement, but I honest to God do not think what I’m going to say next is overstating it:

Ted Lasso is the best TV I’ve ever seen in my life.

Allow me to begin. 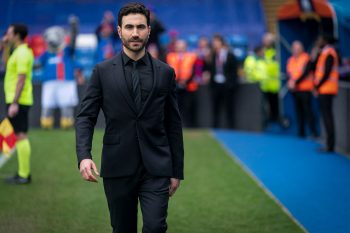 He had me at his hairy chest. A dark-headed guy with a beard and some fur and a seriously foul mouth? I’m in. Episode one. When he was just mostly an asshole (which, I’m sure it doesn’t surprise my readers, is something else that gets me, ’cause when the softie within surfaces, BOOM!).

But I had no idea.

Even when he reached out his hand to his little niece Phoebe as they were walking away in the schoolyard, I had no idea.

Even in all his courtship with Keeley, and their courtship is heart-melting, panty-wetting goodness, no freaking clue what was to come.

I had no idea until Jamie’s dad showed in the locker room at Wembley and eviscerated Jamie in front of his entire team.

And as Jamie stood there, his innards and heart and blood rushing out all over the floor, the one who went to him and held him together was Roy.

I rewound and rewatched that scene so many times, I lost count. I probably did it for twenty minutes. And I did it sobbing. I was undone.

It was sheer beauty. 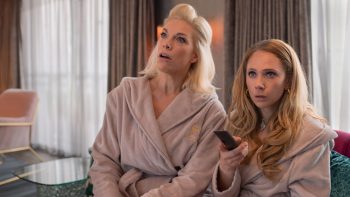 Thank you, Brendan Hunt (the show’s creator and also the exceptional comedic actor who gives us Coach Beard) for creating female characters who are deep and strong and fragile and smart and self-aware and sisters.

Watching Rebecca and Keeley’s sisterhood start and strengthen through these two seasons felt like deep nourishment of my soul.

I was going to say especially Rebecca, a woman “of a certain age” (fuck, I hate that) who is asking herself profound questions about her future and herself. Questions all of us—after a divorce, or after a milestone, or after some comment or some expectation was forced on us—ask, and we get to watch her find the answers.

But it isn’t especially Rebecca. 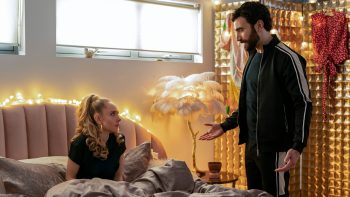 I’m sick and tired of people thinking young women are silly morons who care more about their hair and Instagram filters than their futures and the people in their lives. Keeley is about what you see, and fuck you very much, that’s not only okay…it’s awesome. She can be about hair and furry pillows in her office and lip gloss, but her depth is astonishing, and she can not only earn respect, but expect it because she’s smart AF and works her ass off. And she does it with great hair.

And I’ll add a thank you for Dr. Sharon and Sassy Flo and mom Deborah and just the important message that we women aren’t what we wear and what stereotype you want to slap on us because of it, or our age, or even a subset of our actions. Every person is an ongoing story until they kick it, interesting ones, and women are no exception.

So thank you to everyone behind Ted Lasso for giving us female characters who are stories, not stereotypes.

An American in London

I lived in England for nine years, and I swear to fuck, it was like I wrote some of the jokes (“How many countries are in this country?” “Four.” — “Illinois, that’s a state.”)

Although this highlighting of the profound culture clash between cultures that we think aren’t that different (but Lord, they so totally are) is a deeper statement about how we need to learn more about each other. How insular we feel, or how deeply we insulate ourselves, when we are a global community.

I highlight that joke above because there are, indeed, four countries in the United Kingdom, and there are folks in the UK who get irritated that Americans don’t know that. And yet, many British couldn’t tell you the fifty states. Yes, I know fifty is more than four. I’m just saying, the slack needs to be cut. Don’t just allow someone to learn, allow them not to know so they can learn.

Ted Lasso (the show) pushes this as the team is multi-national, and for example, Ted’s reaction to his experiences, and his language, will be at great odds to what is acceptable to a Nigerian player on his team.

And I love Ted for being that listener. For his “that’s not okay?” expressions and then the understanding the viewer gets that he’s processed that is not okay. It doesn’t hurt him in the slightest to listen and to adjust. It makes his immediate world better, because these people are in his life, and they mean something to him, and it’s worth it to make that effort.

These people are in all of our lives, and they should mean something to us. We should listen. And process. And adjust.

And move forward with compassion.

Ted Lasso teaches grown men boy band choreography for a going away party for a colleague.

Ted Lasso bests a man at darts, not only in an effort to be a white knight who is not saving the damsel in distress, he’s shielding the damsel from more pain, but also, in doing so, he’s delivering a philosophical lesson that we all should embrace.

Ted Lasso loves his wife enough to let her go. 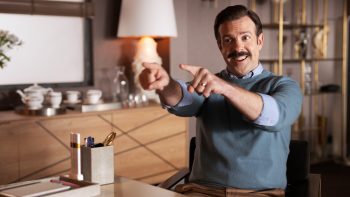 Ted Lasso bakes biscuits and is the coach of a professional football team, and he doesn’t give a shit about winning.

I find myself so overwhelmed with all that is Ted, I can’t even put it into words. Especially in the second season, where we see Ted’s sweet, kind, good ole Kansas boy with his folksy wisdom is flawed and deeply angry and deeply grieving and even more deeply feeling than we knew he was before, which makes us love him all the more.

But in the end, I think the beauty of Ted is that we all should learn from Ted…because Ted is a sponge who is constantly learning from those around him. He understands this is a cycle. You speak. You listen. You smile. You feel. You embrace boy band choreography. You fix the shower pressure because you know any journey starts with that first step, and so does trust.

I could go on and on and on about this show (the funeral “Never Gonna Give You Up” scene, Roy guiding Keeley into the bathroom, my worries about Nate’s state of mind, Coach Beard’s odyssey, Roy’s conversation about cursing with Phoebe, the Christmas party at Higgins’s house), but I won’t.

I’ll just say I sat for hours watching Ted Lasso, and my life is richer for it.

This show is so popular. And in this world as it is today, polarized to the point of despair, where you get smacked with negativity and aggression at every turn, that popularity gives me hope.

It gives me hope we feel we not only need Ted Lasso.

To fix what is broken in us, we need to listen. To learn.