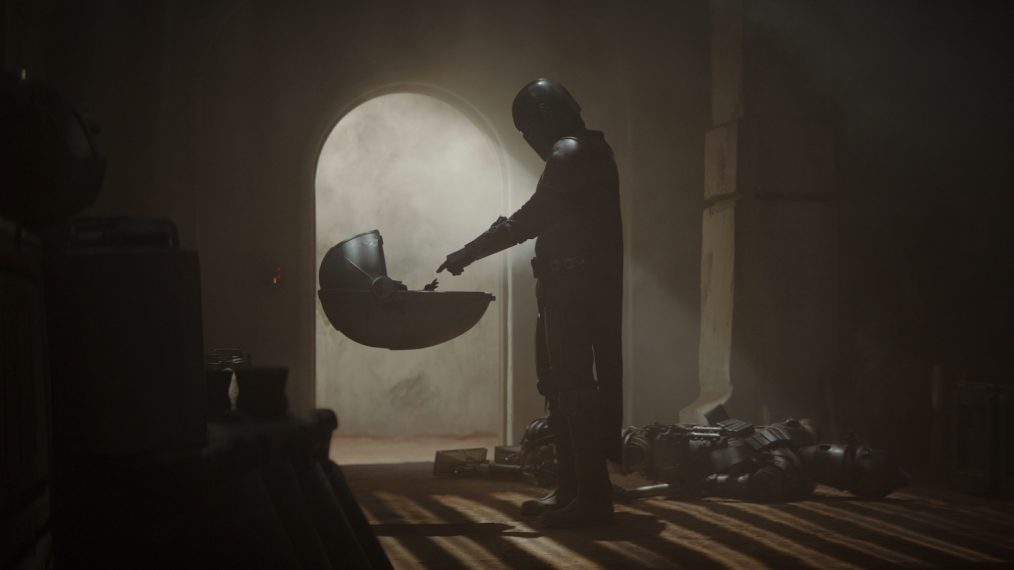 Forty-four years ago, in Boston, Massachusetts, on vacation to visit a family friend with my sister, brother and father, we went to the movies.

And we saw Star Wars.

I distinctly remember the yellow words scrolling up a starry sky, already thinking that was kind of cool.

I also remember everything about coming out of that theater when the film was done. I remember there was kind of a hush, like people had a million things to say, but no way of understanding how to express them. I remember the vibe not only of my family, but of everyone around us who saw the same movie. It was palpable. Buzzing. Electric.

It was this because the world had changed.

For those not around at that time, you may not understand. If you’re younger, you might watch these first three Star Wars films and think, “What’s the big deal? An app on my phone has cooler shit than that.”

In other words, you may think that statement is dramatic.

But in a lot of ways—not just in film, eventually it would leak into everything about life—essentially everyone who went to see Star Wars walked into a movie theater in 1977 where, at home, you had rotary phones, and if you were lucky, you dressed up when you took a flight because plane travel was not commonplace, it was an event.

And you walked out of the theater to unending possibility.

This was the little movie that could.

No, it isn’t dramatic to say it changed the world.

Because it touched a live wire to a variety of dreamers out there, and here we are.

It became the touchstone of so much of what was to come, it is not funny.

It’s also one of the reasons I write.

For it is often lost in the retail and the marketing and expectations of the franchise that, bottom line, the first three Star Wars films had a basic but essential story to tell.

There was extraordinary world-building, yes. There was unimaginably cool action, yes. There were light-years-ahead technological advances in filmmaking, yes.

But none of this would work if the audience was not drawn into the story.

None of this would work if the good was not a good we believed in, the bad was not a relatable bad. 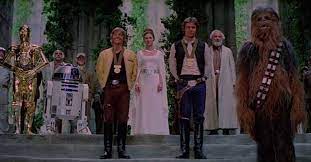 And there was no family.

I’ll say now that you shouldn’t read any further if you haven’t watched the entirety of The Mandalorian and you don’t like spoilers.

Although I am not a flat-out Star Wars geek, the original films are my favorite films of all time. Do not sit with me and watch the first movie. I can quote over them as the actors say their lines, and find it nearly impossible not to do this. I’ve probably seen it upwards of a hundred times. And I can argue that The Empire Strikes Back is straight-up one of the finest films ever made.

Therefore, I have been suspicious, and some would say overly critical of all that’s come since.

For me, it did not stack up.

Oh, it was good. Entertaining. Nostalgic. I didn’t miss a thing.

But nothing, for me, had the power of the first three.

Upon reflection, this may be why I delayed watching The Mandalorian. Yes, I’d seen the stills and memes and Grogu (Baby Yoda) was cute AF. I already knew that concept was inspired.

But I didn’t want to be disappointed again in consuming something that, bottom line, spun off something that is one of the integral things that fed my creative soul when that creativity was first forming. I could even say that the first three Star Wars films jump-started my imagination and made me, at nine, understand on some opaque level my deep need to be a storyteller.

Now I can say, since I was fifteen and Return of the Jedi was released, this—The Mandalorian—was what I’d been waiting for. 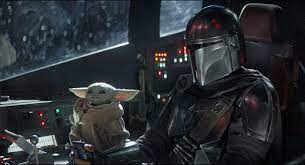 To set the first example of several, let’s step away from Grogu for a bit (and I’ll get into Mando later), and talk about the Razor Crest.

This ship is home. This ship is refuge. It is where the ball on the lever that Grogu loves to play with resides. It is what kept the Frog Lady safe so she could continue her line. It was battered and bruised and torn asunder and even drowned, but even so, it never failed the family it housed, like all homes do.

So when it was annihilated, I had a visceral reaction. I stopped breathing for long moments.

That was the Millennium Falcon.

That was Star Wars.

That is The Mandalorian.

That is why this show so…very…much…works.

I will stand firm in stating that every individual needs to develop, subscribe to and live their own creed. Something that is forged in their upbringing, reinforced by their experience, and then it guides their way through life. Depending on what you face, this can go well and lead you to the light, or it can go poorly, and lead you to the dark.

In Star Wars, it was “May the Force be with you.” A saying that has been used so frequently in our vernacular for the last forty-four years, we forget what the Force is.

According to ObiWan, “The Force is what gives a Jedi his power. It’s an energy field created by all living things. It surrounds us and penetrates us. It binds the galaxy together.”

Created by all living things…it binds the galaxy together.

What is the way?

And when life has thrown something at you that’s important, vital, being unfailingly true to the quest.

What is the quest of our Mandalorian?

Okay, now let’s get into Mando and Grogu. 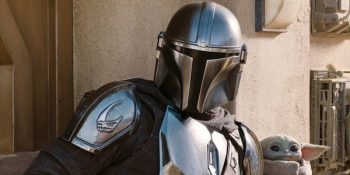 Visual storytelling is this: Not giving a hero a mask, giving him a goddamn helmet and a body covered in armor, all that shielding us from anything we take as norm for reading into the heart of a person. And then giving that person so much heart, we ache for him. We’re amused alongside him. We fear for him when he’s in danger. We cheer for him when he’s victorious.

And yes, we also lust after him.

This is the epitome of actions speak louder than words. I have a feeling I will watch this again imminently in order to study Mando’s actions in all regards, the tilt of the head, throwing himself bodily in front of blasts that might hit Grogu, the set of his shoulders when a woman he’s attracted to and has grown to care about reaches to take off his helmet, and he knows, however much he yearns for her, her gentle way of life, and the life it not only offers him, but also his charge, that he won’t go there. 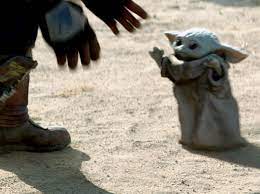 Now, it might be that I’m in the giddy throes of a deep dive into this series, but at this moment I don’t think I’ve ever seen anything so heartwarming as Grogu reaching his arms for Mando to pick him up or clutching Mando’s ankle.

Grogu clinging to Mando’s worn, dusty boot, staring up at him with big, open, trusting eyes, Mando gazing down at him, tall, stalwart, a shelter against a never-ending storm, a shield against a world that keeps blasting at them…lawd.

This “clan of two,” this unlikely father and son, this family doesn’t tug the heart.

Within mere episodes, they own us.

I have one sticker on my car, in the back window a mudflap girl with a ponytail wearing a skirt who’s reading a book.

But soon, I’ll have a Grogu.

After I finish this blog, I’m buying a Grogu Swarovski crystal figurine for my desk. I’ll probably spend a ridiculous amount at Michael’s having my ALA “Read” Grogu poster framed to add to my gallery wall next to my Fortnum’s canvas, framed Monkey Bar menu, sepia picture of Harry’s Chocolate Shop bar, shadow-boxed carving of Maori art and the Audrey Hepburn quote “If I’m honest I have to tell you I still read fairy tales and I like them best of all.” (it seems apropos). These things define me. My history. My adventure. My dearest friend. My creation. And my love of fairy tales.

And Grogu will be a part of that.

I have never in my life done this for any movie, television show, book or band.

Yes, Mando and Grogu own me.

“It did not know it was my enemy.”

This might be the most profound thing I’ve heard in ages.

And I believe that we as a people should reflect on this saying and do it deeply. 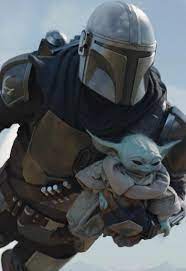 Mando had found Grogu as a bounty to be handed over to bad guys.

Grogu had only been found.

And the first thing Mando did, upon meeting Grogu, was save Grogu’s life.

Mando had Grogu’s implicit trust from that moment on, and Mando felt it.

A family was born.

Typing this and rereading it gives me chills. Family is that important to me.

And good storytelling is my life.

This is Star Wars storytelling. Blasters firing and bad guys you detest, characters you’re unsure of, characters you know will have your back through anything, worlds that have your eyes drinking in the creative imagination, feeling so damned deep when a droid offers its existence for the continuation of our beloved fictional family, we’re gulp-sobbing.

This is what I’ve been waiting for since 1983, when the last of the original three had been consumed.

This is the kind of thing that informs my storytelling and makes me aspire to do it better. To build something richer for my readers.

To give it all the bells and whistles I can, but in the end, all that boils down to making it about family.

Making it about heart.

This is the way.

And may the Force be with you.